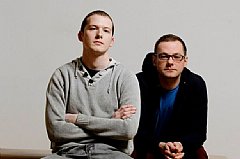 Will is a BAFTA winning writer/director, and to top it off, he's from just along the road in Alcaig. Will got off to a pretty good start when his first short film ‘The Making of Longbird’ won over 30 awards at international film festivals & received a British Academy Award in 2013. He has gone on to do great things and produce many a laugh with his writing and animations.

Ainslie is also a BAFTA winning writer/director and he just so happens to be Will's working partner. Ainslie's poignant, funny, utterly delightful film 'It's About Spending Time Together' won a BAFTA New Talent Award in 2012. He has since gone on to create wonderful music videos and animations and much more, but we urge you to watch the aforementioned as soon as you get the chance!